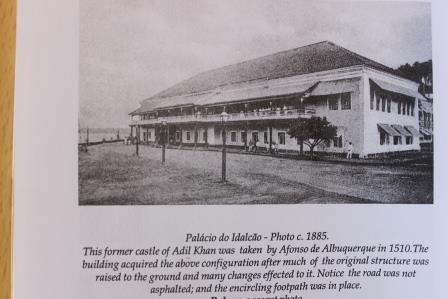 If we flashback to epic-era, Goa is considered as the land of Lord Parshurama. It was all water, Lord Parashurama unlashed the arrow, splashing water apart thereby creating Goa.

In all these years Goa witnessed the regime of various rulers like Shilahar, Kadamba, Bahamani, Adilshah and finally entered the Portuguese. Portuguese who came as traders, became rulers and carried on their regime for about 450 years. Time to time various revolts erupted against Portuguese. 1st major revolt was the Desai’s revolt in Cuncolim in 1575.

Whilst the rest of the country saw democracy in action with the dawn of Independence on. 15 August, 1947 and its consolidation with the proclamation of the sovereign and democratic Republic of India on 26 January, 1950, the people of Goa were still groaning under Salazar's fascist regime of terror, one of the oppressive dictatorships on record. The prolonged Goan freedom struggle which culminated in the liberation of Goa on 19 December, 1961, saw the end of the colonial domination and its replacement by a democratic set-up as an integral part of India. It marked a watershed in the socio-political history of Goa.

Article 3 - The State of Goa

The Beginning of the New Assembly Complex

The official website of Goa Vidhansabha has been developed to provide information about the Goa Vidhansabha to the general public. The documents and information displayed in the website are for reference purposes only and do not claim to be a legal document. Though all efforts have been made to ensure the accuracy of the content, the same should not be construed as a statement of law or used for any legal purposes.

The information contained in the website is based on the inputs received from the concerned Sections/branches of the Secretariat. Users are advised to verify/check any information with the relevant published documents before acting on the information provided in the website. Links to other websites that have been included on this website are provided for public convenience only. Goa Legislature Secretariat is not responsible for the contents or reliability of linked websites and does not necessarily endorse the view expressed within them.